The “Mac Software Gap” – Where Can the Mac Platform ‘Step Up’ in 3D Printing Software? 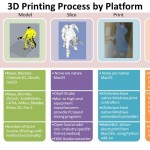 With the increase in interest on the additive manufacturing industry, 3D printing software and technology is quickly becoming an area of exponential growth and opportunity. And after we began to do an analysis on the current state of 3D print software, we quickly realized that the Mac platform had a lot of areas that could benefit from native software support! That’s why when MacWorld 2014’s MacIT conference wanted our CEO, Dima Elissa to present on 3D printing and the medical industries we knew it would be a good time to point out some of the current gaps and weaknesses Mac software has in 3D printing

The 3D Printing Process and Where the “Mac Software Gap” Lies 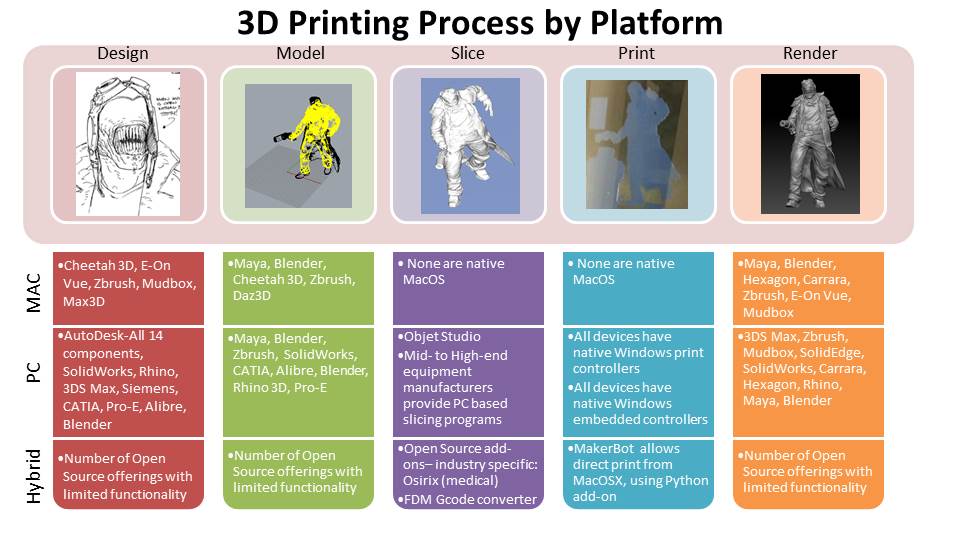 As part of our presentation, we compiled together a chart showing the current software that’s available and where it falls into the 3D printing process we used for bringing the “Hollow Man” figure designed by Dave Dorman to life. What it shows is a fairly polarized spread in Mac native software options. While Mac supported software comes in a slew of options for the design and organic modeling end of the process, the structural modeling and printing end fall rather short on options. This leaves a sizable missed opportunity in engineering software, a long PC dominated area, as well as missing support in areas that have some of the biggest impact on 3D printing software: the slicing and printing stages. Currently, the only support in these areas comes from OpenSource add-ons and minor support from the 3D Printer Company, MakerBot.

You’re probably wondering why these areas are in such dire need of Mac native software options, so let’s explore just what these gaps are.

Engineering and Why it Needs Mac Software Support

Let’s start with Engineering. Today, if you want to get any 3D work done in Engineering, you’re more than likely sitting in front of a PC. But why is that? The two primary software packages used in the engineering world are AutoCad and SolidWorks, both of which are not available on the Mac or have limited support, leaving engineers missing out on all of the software’s features.

This means when you want to use the quick and versatile modeling known to CAD software, you’re pretty much forced over to a PC. And given how wide reaching CAD design software is, helping architects, product designers, engineers, and more, plan out their projects in 2D and 3D, it pushes a lot of designers over to Windows supported software. This is a huge missed opportunity in Mac software which could bring the functionality and layout many designers in other industries adore, to the engineering and product planning world.

Continuing on the analysis, why would Mac software that supports Slicing and Printing be important to have? First, let’s go back and consider that the design end of the 3d printing process (concept, modeling and rendering) can all be run on a variety of Mac software and many designers prefer running these organic modeling and design programs on Macintosh. However, as soon as you want to turn that 3D model into a physical print, you either need to rely on sometimes finicky add-ons, or port your data to a PC for the last leg of the trip.

While that might not seem so bad at first, it’s important to remember that the slicing process and the controller process in the print stage of 3d printing are the key players in getting your model to physical form. If the 3D printer itself is the body, the slicing and print processes are the brain and nerves telling it what to do. Consider the importance of each stage and some of the risk factors in each area of printing when you need to convert Mac data.

Slicing is a process that is unique to the 3d print world.  It is the process whereby 3D images are broken down into layers that are scaled to what the actual printer can print at a time.  The Slicing process also sets the support material, heat settings, material selection and printhead parameters that are vital to a successful print.

The risks of not having a Mac based Slicing system:

In this stage the risk of conversion is that:

All of these can result in wasted time and money, especially when you get into more valuable materials or larger sized prints. Nothing is worse than being halfway through a sizable print and then realizing that your 3D model isn’t printing right! Alternatively, if a Mac user wanted to avoid these risks by using 3D printing companies and services, they would likely also need to pay someone else to validate the information after slicing to ensure a successful print.

As you can see, there’s plenty of room for Mac native Software to jump into the 3D printing industry. Introducing a means to provide Mac support end-to-end will not only directly help in bringing users over to the Mac platform, it will also create an easier entry into 3D print for current Mac users. 3D printing companies and even hobbyists are always looking for new and even better software to help them bring their 3D visuals to the physical world, especially so on their favorite platform of choice. So ask yourself where can you jump in and help to bridge the gaps in the innovative field of additive manufacturing?